Arlette Vermeiren was born in Brussels in 1937.
Graduated with the highest distinction in screen printing at La Cambre in 1963, she taught screen printing for thirty two years at the Academy of Fine Arts in Tournai and was a designer in textile design for the Belgian and Italian Jacquard factories.
From 1998 to 2017, she was artistic director of textile research – contemporary art at TAMAT, Museum of tapestry and textile arts of the French community of Belgium in Tournai.
Numerous personal and group exhibitions in Europe, U.S.A, Canada …
Present in private collections and in several Museums including the Tapestry Museum in Tournai, the Modern Art Museum in Luxembourg, the Haute Provence Museum in Gap or at the Boghossian Foundation.

Arlette Vermeiren or the ardent lightness of knotting

Since her childhood, Arlette tells us she was fascinated by the interweaving of the threads of textile materials. The vegetal fibres of Flemish tapestries enchant her as much as the debris of fishing nets found on the beach. Since then, delighted by the process of knotting, Arlette has been gathering up diversity. A nodal compulsion fuels her attraction to spinning, weaving and assembling.

In order to get down to work, the artist becomes a gleaner, she collects and amasses a collection of wrapping papers of all kinds, sweets, cigarettes, … Cut into strips, then spun, the paper loses its finish and consistency, it becomes textile, fibre again. The assembly can then take place thanks to Arlette’s masterstroke: the hyper development of the nodal function. The spinner’s hands then start knotting to make lattices, nets, curtains or even huge floating sets of a fascinating weightlessness. The papers or fabrics spun between her hands are degreased to gain in lightness, knotted they assemble according to an arrangement which gives to see and  think a writing consisting of interlacing signs resonating with an almost musical rhythm.

Pre-Columbian civilization already used a complex system of strings of different colours and knots to communicate and transmit information. Arlette continues and develops this age-old process. She organizes the deployment of her material by alternating threads according to an interactive practice that gives birth to forms. They have the particularity of radiating like a living organism in perpetual growth. By diverting the destination of the packaging or the remains of paper reams, Arlette works with the fragility of the fibre. She becomes its ally and deploys the magical power of  lace. Her famous floating columns reconciling top and bottom, sky and earth guide us towards infinity.

The artist with the looks and hands of a fairy accumulates in her apartment her multiple finds as well as more than 10,000 books constituting an inexhaustible supply of references, knowledge, various materials related to her vanishing point, textiles. For a very long time and more and more harmoniously, Arlette has been speaking the language of fibre. She articulates and composes sets quivering with lightness and transparency. Her aerial compositions rustle because the knots that constitute them are not rigid points of tightness. On the contrary, they participate and communicate with the practice of interlacing implemented by the artist. They are constantly generating new signs that make up a spatial assortment of living chords. 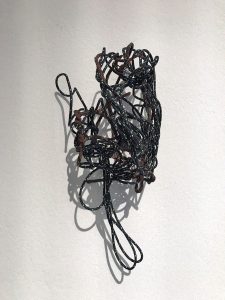 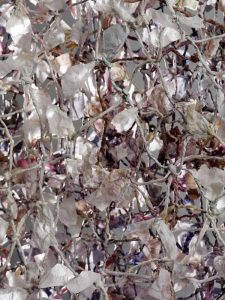 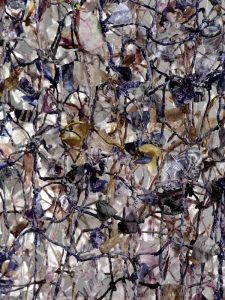 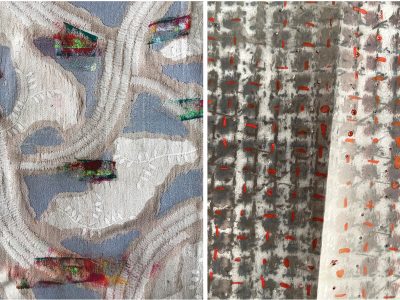