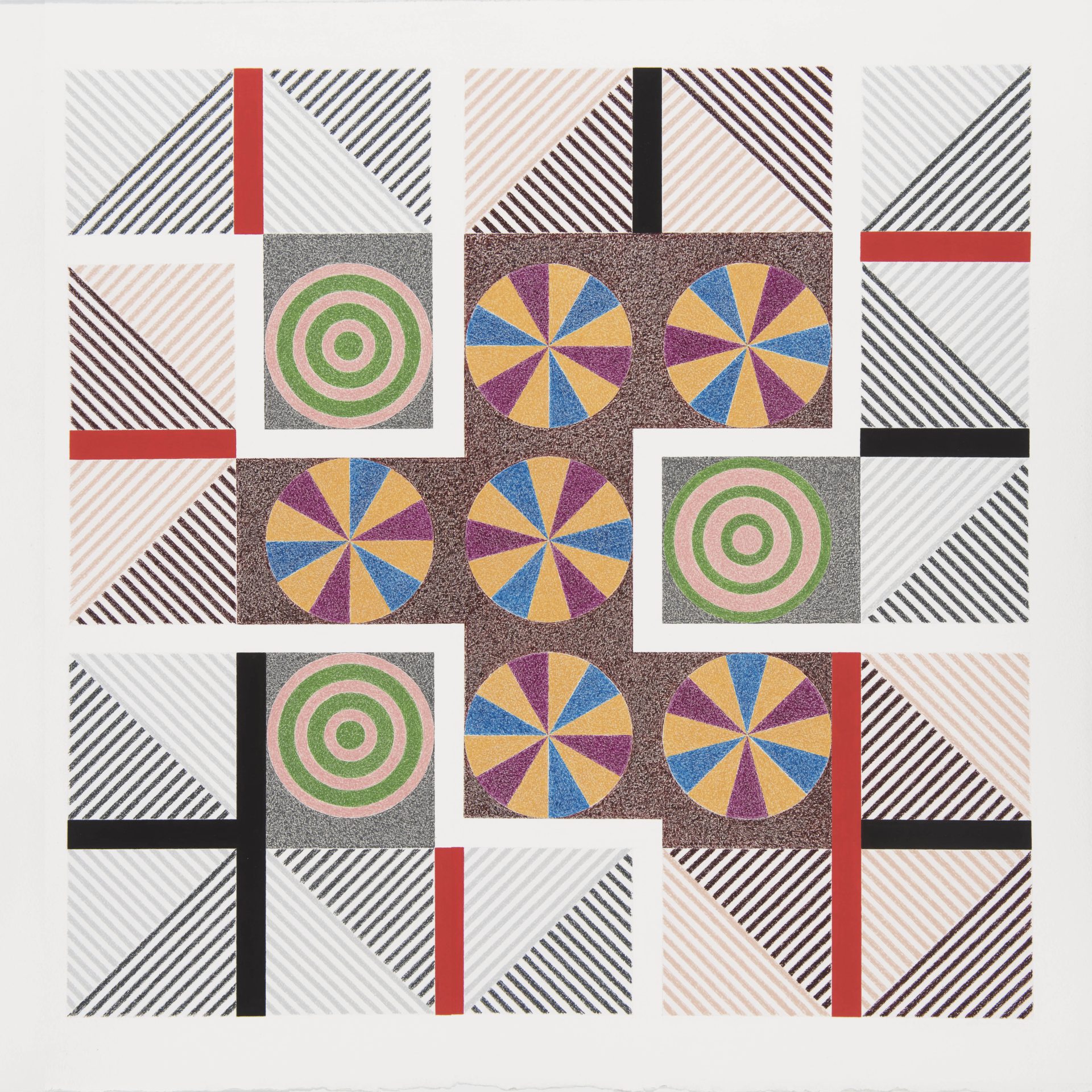 The work proposed by François Hinfray testifies to the contemporary paradigm of the interrelation, even the intercultural.

Indeed, the artist’s approach, based on mathematical research, gives us the opportunity to observe imaginary arrangements of forms that respond to each other. These geometrical tribulations, constantly questioned, propose endlessly different possible combinations.

Everything happens as if in the tireless work of the draftsman it was necessary to reinvent our conception of the world and reposition its first milestones. The invariants of geometry become variable, gain in color and thus mutate towards life.

It is only in appearance that François Hinfray’s topologies attest to a work governed by abstraction. The latter rather proves to be reanimated, bewitched by color. The combination form-carnation which emerges from it, attests of a fruitful alliance between the mathematical spirit and vital exuberance.

The work’s rigorously organized features reveal the seriousness of the undertaking and yet the worlds in which we are invited to enter do not contribute in any way to reassure us, or to demonstrate anything. The stake of the work is elsewhere, it is located at the borders of reality in the peripheral zones of our imagination.

In the same way, we can try to make connections with the Australian aboriginal painters and their relationship to the cosmos. Their art of abstract lines integrates the patterns of cosmic order, linking  the earth to the sky in a convincing symbiosis.

With François Hinfray, we mainly deal with concordances between the lines which, activated by color, allow us to detach ourselves from reality and bring us back to it in a symbolic, playful and jubilant way.

Did you said “Topologies” ?

Simone Schuiten has chosen to call the exhibition of my work that she is hosting in her gallery “Topologies”. A fairly surprising choice : what does this work have to do with topology, a rather abstruse branch of mathematics?

Kiran Katara, to whom I owe the chance of this introduction at Odradek, was leaning towards a simpler title, revolving around the game, because she sees in my paintings or drawings something playful and, also, arranged or elaborated in the mode of a game strategy.

But if this reference to mathematics is relevant, it is only regarding some methods I used and not regarding the roots of my inspiration. Indeed, the latter can first be traced back to the works of my countless predecessors and sources of inspiration, then to the archive of images that have left their mark on my memory, and finally to the unconscious influence of my personal taste and style that are constantly evolving. Nevertheless, I have to admit that the methods I follow may reveal a certain order that is evocative of mathematics. I recognise that I resort to calculations, search for geometric balances that are not always easy to achieve (which does not exclude a certain amount of cheating), and also am concerned with connections and an underlying logic, which the eye perceives without consciously identifying them.

But all this does not lead to topology and stops well before. So why “Topologies”? I said the word while discussing it with Kiran and Simone (a distant memory from my mathematics studies), and it stayed with her.

Probably not by chance ; the term already contains the greek root, topos, the place. The same as in topography. Perhaps my drawings, like tracings on a map, evoke the survey of imaginary places? But topology, which was originally called the analysis of situations, is something else. To define it simply, it is precisely the geometry of situations, the study of the properties of space that distinguish a certain number of relations between geometric objects (adjacency, inclusion, intersection, etc.). And this other thing seems to have spoken to Simone, in an intuitive way.

Of course my work does not borrow anything directly from real topology, neither its concepts nor its rules. But it is not excluded to follow in an artistic work a different direction but parallel to a purely rational and abstract construction. When the mind drives a work as concrete and manual as the conception and fabrication of images, perhaps it borrows, in a primary and involuntary way, the elements of much more sophisticated constructions. Perhaps the paths of artistic work intersect with those that other minds have followed in order to elaborate objects of great theoretical complexity but which retain a link to reality. I have often had this impression in front of non-Western works, for instance those of pre-Columbian, African, Oceanian or Australian natives, works that before being artistic had other social, ritual or cosmic functions. And I felt that often behind their graphic simplicity, their sober geometry, a silent and mysterious complexity was also hidden. Without this dimension of another kind, I wonder whether it is possible in my work to render a comparable, spiritual, sensitive but unspeakable depth.

I rarely have such a reflection of my own. I always have the feeling that I create images instinctively, drawing from my personal file where I accumulate views from the day before, memories of travel, objects or landscapes glimpsed, night flashes, etc. My reflection concerns other elements, especially practical ones, the support and the format, the adequacy of the technique used, the combination of colours, the adjustment of proportions, the invisible but useful variations. This is why it is difficult for me to talk about my intentions and the meaning of what I do, and why I prefer to listen to what people say.

To talk about it myself, I would need to have the distance that the spectator, a stranger to the production, has with regard to my work and which gives him a capacity to decipher it. Sometimes letting time pass and rediscovering my work later allows me to take this step back and feel something different than what I thought I had left. To stay on a general level, I regularly surprise myself with my liking for colour and a certain joyfulness especially in my paintings. This doesn’t really seem to fit in with the reality of my character. And yet, it is there in me…

So where does topology nestle? In the geometric modulations of my drawings, the relationships between their parts, the deformations of lines, the formation of networks? The question is not essential. What is interesting is that every work of art contains more, and something else, than what its author thought it contained. And that the viewer’s gaze acts for itself as a revelation of this something else, something else that it also brings with it in part.

The choice of the title of this exhibition has therefore had the merit of triggering this short reflection which takes me out of the confines of my craft world, and of forcing me to express it in a few words that I am sharing with you. I thank Simone and Kiran for giving me this opportunity and you for your visit 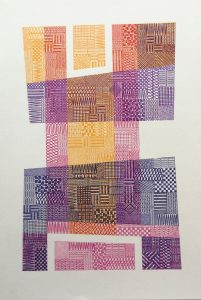 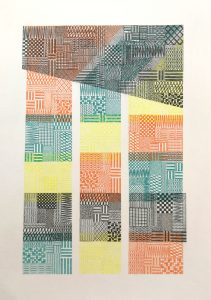 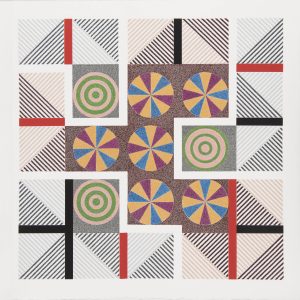 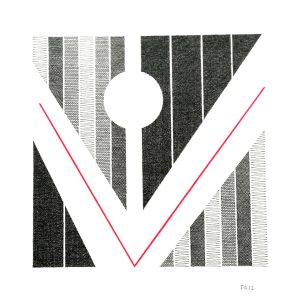 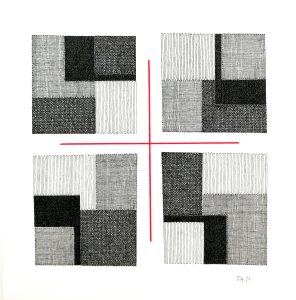 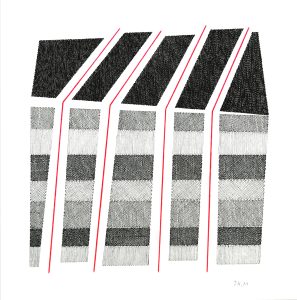 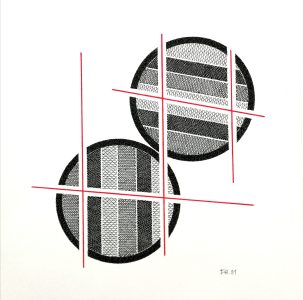