Born in Hsinchu (Taiwan), Mei-Ling Peng first studied traditional painting in Taiwan before continuing her studies in Belgium at the National School of Visual Arts in La Cambre (Brussels). Graduated in 1995 from the painting section, since 1997 she has been teaching painting at the Belgian Institute for Advanced Chinese Studies at the Royal Museum of Art and History of the Cinquantenaire (Brussels).
After numerous exhibitions in Belgium, notably in Louvain-La-Neuve (1997-1999-2006), Liège (2007), Charleroi (2008), Viroinval (2006-2008) and Brussels (2008-2009-2010), as well as ‘Elsewhere in Europe (Poland, Germany and Italy), his paintings have been exhibited in Shanghai and Beijing since 2010. 2014. We will also note a solo exhibition in the Dominican Church in Brussels (2017) and another in duet with Li-Chiang at the Nanshan Gallery in Brussels. 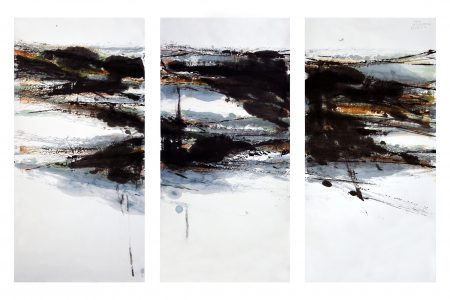