Bangyao Li started his career in the 80s. Witnessing China’s opening to the outside world advocated by Deng Xiaoping, the artists from this pivotal period discover Western Modernism and Post-Modernism at the same time.

For China, the end of the 20th century turns out to be a prodigious and elated period that gives birth to a middle class fascinated by globalization, consumer society and a passion for comfort

The developments in Bangyao Li’s work give insight into his process of meeting with Western aesthetics and reflecting upon the changes the Chinese world is experiencing with a surprisingly rapid adaption.

The appearance of Pop Art on the Chinese artistic stage is, in this case, totally justified. Within a few years consumer objects have appeared en masse on the Chinese market, and Bangyao Li, in his own way, is not insensitive or indifferent to this drastic shift.

During the Cultural Revolution, Propaganda art ostentatiously revealed the power of image. From that time onwards, Chinese culture and aesthetics have used images in a very specific way. The ideology associated to it controls the collective memory. Following Bangyao Li in his semiological analyses of consumer products, we encounter fetish objects celebrating postmodern man.

Since 2009, Bangyao Li has devoted his art to an analysis of the evolution of the Chinese home interiors using stereotyped images.

In residence at ODRADEK, the series he introduces are about the metamorphosis of Chinese needs and aspirations since the penetration of the Western lifestyle. Over his 3-month stay in Belgium, the sociologist painter has carried on his investigations by surveying the interior design of our homes. 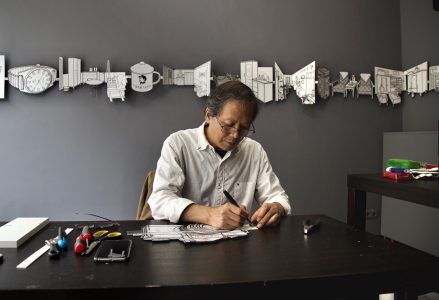 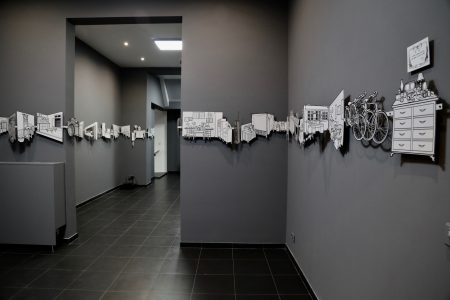 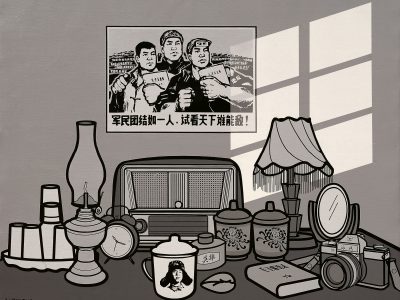