Born in 1935 in Gerpinnes (Belgium), Gabriel Belgeonne studied painting at the Academy of Fine Arts in Mons before becoming a teacher and advertising assistant with Zéphir Busine, painter and designer.
In 1964, he entered the world of engraving following his meeting with Gustave Marchoul, then mastered the art of lithography on the advice of Arthur Robbe. He has since devoted himself to engraving, as well as to painting, affirming that “it is by making engravings that I rediscovered the function of color, volumes and lines”.
His many activities bear witness to his passion for this technique, whether on the editorial, educational or institutional level.
Indeed, in 1965, he became a member of the ‘Cap d´encre’ group and founded the Tandem association in 1971.
He is appointed as professor of engraving and later on as head of the State Graduate School of Plastic and Visual Arts in Mons.
From 1990 onwards, he was responsible for the workshop “Engraving and book illustration” at the National Graduate School of Visual Arts, La Cambre, in Brussels, an institution he was in charge of in 1999-2000.
He founded, with André Lamblin, the International Biennial of Engraving of Condé-Bonsecours and was a founding member of the Musée du Petit Format in Couvin, as well as of the Center for Engraving and Printed Image of the French Community of Belgium in La Louvière. .
Gabriel Belgeonne’s empty writing :
As an engraver Gabriel Belgeonne is necessarily dealing with the practice of emptiness. His work thus finds its origin in the hollow, the recess, that is to say in an experience of substraction which allows the ink to find its way.
In a very simple and unpretentious way, Gabriel Belgeonne explains his work, which he presents as a manifestation of writing.
Aware of his affinities with Far Eastern philosophy as well as of the calligrapher’s meditative concentration, he proceeds by producing signs. These make up an alphabet that cannot be read in a conventional manner. Nevertheless, these letters or symbols trace and compose a story. A story, composed with events occurring between the heavy and the light, the empty and the full, the high and the low, that makes many other stories possible. What is told belongs to what is given appearance by the gesture and occurs in the composition of the art work.
Through painting and engraving Gabriel Belgeonne incorporates letters and signs into a unity which tends towards the top of the work. He thus composes, in calligraphic style, moments of spatial tension where emptiness is celebrated as an inalienable founding presence.
So, let’s no longer try to decipher black and white signs but rather to participate in the fundamental rhythm of emptiness and fullness, of heaven and earth. 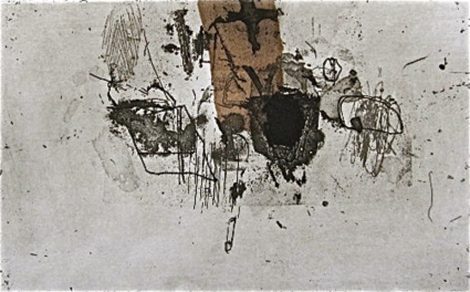